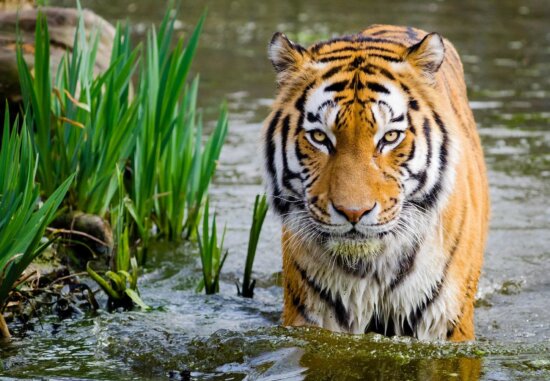 Tigers are practically invisible when stalking their prey at twilight or morning.

Whether they live in grasslands, forests, or jungles, wild tigers have deep orange coats with dark stripes.

So, how is it possible that a brightly colored animal manages to remain undetected long enough to hunt?

Its coat colors, spots, and stripes have adapted to either help them find potential mates or hide them from threats.

Their coat color provides them with Camouflage allowing them to hide in the jungle undetected. Audience watch As Lion Defeated A Tiger in Arena

Tigers do not need to hide from creatures that might devour them because they are apex predators at the top of the food chain.

Tigers are predatory animals, they rely on meat for food and use stealth to ambush prey

The limited vision of their favored prey aids them. Deer and other hoofed animals cannot see the entire spectrum of colors. How to survive tiger attack

It improves their vision in low-light situations and renders them vulnerable. The tiger’s fur isn’t brilliant orange to their eyes; it seems green and blends in with the surroundings.

The tiger’s markings are also significant. Their brown to black vertical stripes are an example of what scientists refer to as disruptive coloring.

They assist the cat blend in with trees and tall grasses by breaking up its shape and size.

This is significant since, unlike lions, these predators do not hunt in packs or have the speed of a cheetah.

Tigers are solitary cats who live by using stealth and camouflage. Even the stripes of the six tiger subspecies differ. Why do tigers live alone?

The Sumatran tiger subspecies have much narrower stripes than the others and have more of them.

This aids in its camouflage in its dense forest habitat. Their striped patterns are all different, precisely like a zebra’s. There are no two alike.

They’re as unique as a person’s fingerprints. Their fur isn’t the only thing with black stripes.

It’s shocking to observe that their skin resembles that of a tattooed person: Its fur is striped in the same pattern as its fur!

There is an old Indian story that says a tiger once looked like a lion but he angered some Jungle God by placing himself above the God.

In revenge, God sent burning coals onto the tiger which gave him his stripes. But it’s pretty hard to believe, isn’t it? TIGER VS JAGUAR – Who is The Real King of The Jungle?

The lion’s habitat is sandy savanna, whereas the tiger’s habitat is forests, hence their coats blend them into their natural habitats.

Any biologist will tell you that the fact that this is encoded in the animal’s DNA is not a cause, but rather a consequence, via the process of natural selection.

This example shows how monoidal categories allow us to move away from an atomistic or reductionist mindset to one in which systems are studied in terms of how they interact with other systems rather than their parts.

Could Bears Survive in Africa?