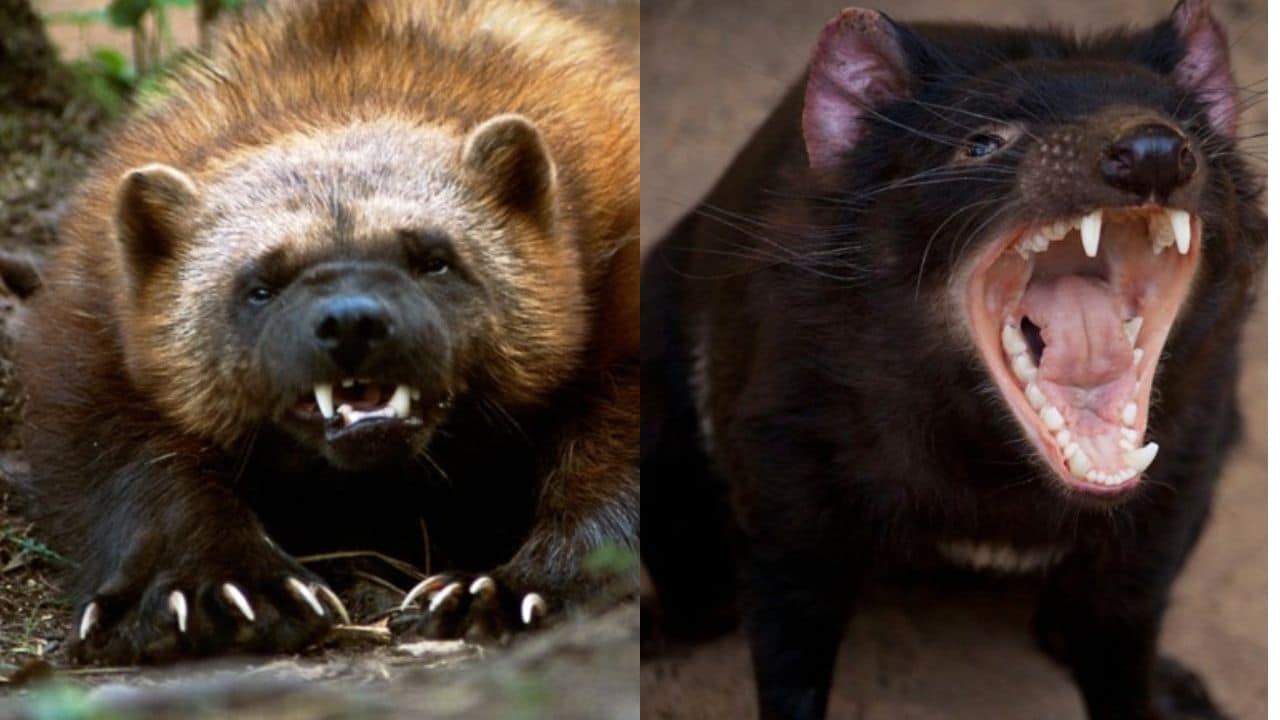 Despite having a similar look, the wolverine and the Tasmanian devil have some noticeable distinctions.

Tasmanian devils are marsupials, whereas wolverines are closely related to weasels. Additionally, the behavior, habitat, and dietary habits of these animals differ.

The largest and most vicious member of the weasel family is the wolverine (Gulo gulo).

This land-dwelling mammal is known by many other names including the Skunk Bear, Devil Bear, Carcajou, and Gluten.

The creature is so strong that it would be the strongest animal on earth if it were the size of a bear!

The Tasmanian devil is not just a Looney Tunes cartoon character! It is a very unusual mammal that can only be found on the Australian island of Tasmania.

It is a marsupial, meaning it is related to kangaroos and koalas. Why is something the size of a small dog given the nickname and reputation of being “fiery”?

The wolverine has a heavyset, muscular body that measures 26 – 41 inches (65 – 105 centimeters) in length excluding the tail.

They have a short, pointed snout and a round, blunt head.

Wolverines have long, glossy body hairs that are lengthy and dark brown in color with a lighter stripe running down each side of their bodies.

The individual’s face, neck, and chest all have distinctive patterns.

The long, dense fur of wolverines is very resistant to frost since it does not retain much water, which is frequent in their cold habitat.

These creatures can consume the entire body of their victim, including the hind, hooves, and bone, thanks to their strong teeth and jaws.

The coat is primarily black with a whitish breast mark; occasionally, the rump and flanks are also white-marked.

Gaping jaws and strong teeth, along with its husky snarl and often bad temper, result in its devilish expression.

It was once native to the United States but is now limited to Alaska, a few scattered and remote Rocky Mountain regions,

including Colorado, Idaho, Wyoming, Montana, and Oregon, as well as the Californian Sierras. Wolverines favor wide-open plains and forest habitats.

Their dens are typically made of a small cave, rock crevice, tree which has fallen, or an already-existing hole where they can make a rough bed of grass and leaves.

The island state of Tasmania, which is a part of Australia, is the range of the Tasmanian devil.

Eucalyptus forests, woodlands, coastal scrubland, and agricultural fields all are their habitat.

Devils are the top carnivores in Tasmania, despite their bulky build and huge head giving them a slow, awkward look as they move.

Tasmanian devils establish home ranges that change depending on the amount of food available.

What do they eat?

Wolverines are omnivores, meaning they consume both meat and plants.

as well as smaller creatures like ground squirrels and rodents, as well as berries and bird eggs. However, they prefer meat and will go to considerable lengths to obtain it.

Wolverines have a strong sense of smell and are capable of detecting prey 20 feet under the snow. They will kill animals that are hibernating by digging into their burrows.

Wolverines are sly hunters when looking for food. They can smash a carcass and eat through bone because they have powerful jaws and teeth.

Curious and energetic, Tasmanian devils travel long distances each night in their pursuit of food, sometimes covering as much as 10 miles (16 kilometers).

They use their keen senses of smell and hearing to find prey or carrion.

Tasmanian devils are basically carrion eaters and scavengers because they are carnivorous marsupials.

However, they also chase live prey like birds and small mammals.

Devils are capable of eating the majority of a carcass, including the bones, thanks to their powerful teeth.

Although they are solitary by nature, they frequently group up to eat carcasses, which is where the majority of the growling and shrieking occurs!

How do they behave in the wild?

Wolverine behavior in the wild

Except during the breeding season, the wolverine is a solitary animal that normally travels alone. They almost never get along with members of the same sex.

They are nocturnal animals that do not hibernate. Despite being primarily terrestrial creatures, they are excellent climbers and have strong swimming abilities.

The Wolverine makes few vocalizations except for the occasional grunts and growls to express its irritation.

Male wolverines use scent glands to mark their territories, however, they share them with several females and are believed to be polygamous.

Tasmanian devil behavior in the wild

Tasmanian devils are usually solitary, socializing only when feeding and mating. When this happens, the non-territorial animals show extremely aggressive behavior.

During the daytime hours, they typically sunbathe or shelter in dense bushes or dens, which are either underground burrows or hollow logs.

They come out of their dens only during the night in order to feed. Tasmanian devils possess well-developed senses of hearing, sight, smell, taste, and touch.

These animals communicate with each other through a wide variety of vocalizations such as the well-known horrifying screeches and fierce growls.

Wolverine and Tasmanian devil Battle, who will win?

Tasmanian devils and wolverines share some similarities, especially when it comes to their appearance and potentially aggressive behavior.

Also, there are significant variations between Wolverines and Tasmanian Devils in terms of their habitats, diets, dangers, and population sizes.

Tasmanian devils rarely get as large as wolverines.

But let’s assume that the two competitors have approximately equal weight, around 26 pounds (12 kg), to make the fight fairer.

But, Wolverine is one of the most aggressive animals in the world. In essence, a wolverine is a small bear.

Wolverine is so strong, big, and fierce that even bears are scared of them. The devils resemble a cross between a dog and a rat.

Though too aggressive to truly be a pack, Tasmanian Devils do occasionally team up to take out foes or bigger prey.

It is possible that the bite force of the Tasmanian devil is greater than that of the wolverine, but I don’t think it will be a decisive factor.

Despite the fact that size won’t matter in this fight, the Wolverine would probably win in a 1v1 battle easily because of his extreme savagery and brutal strength.

At least one good bite will be taken by the Tasmanian Devil, but it won’t be enough to prevail.