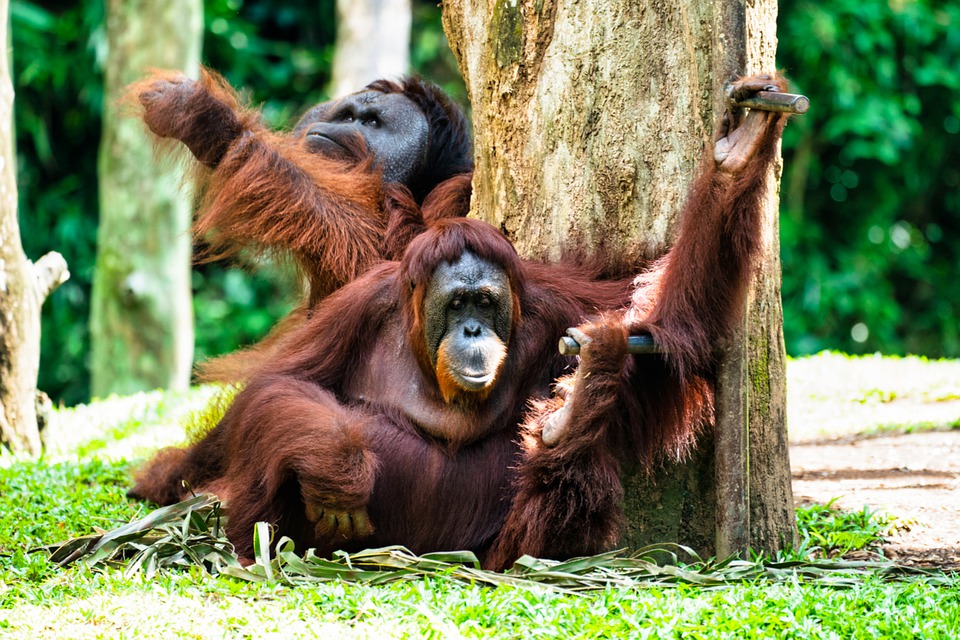 Orangutans are the world’s largest tree-dwelling mammals, with unique red coats and strong, powerful arms that allow them to swing from tree to tree.

They are mild-mannered creatures that would rather spend their time eating fruit than engaging in fights.

How strong are orangutans?

The strength of an orangutan is concentrated primarily in its arms. These apes travel and swing from one tree to another using their forelimbs.

It is easy to understand that a heavier body mass requires more strength.

Swinging and gripping a branch while jumping needs incredible power as well.

As a result, the bigger orangutan’s body size, the stronger it is, the apes build strength in a similar way to calisthenics or weightlifting.

Depending on their species and size, male orangutans can lift more than twice as much as their own body weight.

In addition to muscle strength, an orangutan’s arms are also long. In fact, the arm length (spanning) can reach eight feet, depending on the actual size and species.

Orangutan females can also lift hefts twice as heavier as their own body weight. They are, however, around half the size of a male. And because of that, they are weaker.

How strong is the bite of an Orangutan?

Orangutans have powerful bites in addition to strong arms. The biting force is around 575 PSI.

To crack the shells and seeds of the fruits they eat, orangutans need strong bites.

Male orangutans have been seen fighting with each other in rare instances, generally over their mate.

The show was quite a spectacle and a tremendous display of strength. It is impossible to deny that they are more powerful than they seem.

How Strong Are Orangutans Compared To Humans?

A large part of any animal’s strength isn’t simply its muscle mass and density, but also mechanical advantages given by muscle and tendon insertions, and due to orangutans’ proportionally long arms, their tendon insertions are much further down their arm in comparison to humans.

Orangutans are about seven times stronger than humans in terms of body strength. Their bite force is nearly four times bigger than that of a human.

As a result, humans have little chance of resisting an orangutan in a face-to-face confrontation.

Are Orangutans Dangerous to humans or other Orangutans?

Orangutans are not violent, and they are not hostile against humans or other orangutans. However, because orangutans are powerful wild animals, caution should always be exercised when in their presence.

It indicates that, despite its non-aggressive nature, a human never knows what and when a wild animal will do.

How powerful are orangutans?

If you want to further compare your strength to that of an orangutan, know that the apes can lift weights over two times heavier than their own body weight, and they do so effortlessly.

Some of the world’s strongest men could lift a similar weight, but it would need a lot of effort, and you’d have to be a professional weightlifter to pull that off.

In reality, the average man would have difficulty lifting more than 100 pounds above his head (45 kg).

The average person weighs 176 pounds (80 kilograms), which is less than their own body weight.

Speed, stamina, intelligence, height, weight, and a stronger punch are all advantages of humans.

Humans have weaker muscles, a weaker bite, and a lower pain tolerance.

Stronger muscles, a stronger bite, a higher pain tolerance, and the ability to utilize feet as hands are all advantages of the orangutan.

The orangutan’s disadvantages are speed, stamina, less power in the punch, height, and weight.

If a human has managed to provoke an orangutan to violence, their best bet for survival is to start running and keep running.

How Strong Are Orangutans Compared To Other Apes?

Chimps, as opposed to orangutans, are used to violent behavior.

They are known of going into physical fights with one another on a regular basis.

Despite the fact that chimps are more experienced fighters, orangutans are substantially larger than chimps.

As a result, if the two got into a fight, orangutans would win since they have more muscle mass and strength in general.

The brute strength, in combination with their arboreal lifestyle, would be the main orangutans’ advantage.

As for the gorillas, Orangutans are not stronger than gorillas.

Orangutans are arboreal, which means their feet are more adapted to climbing and swinging from tree to tree than to walking on land.

Gorillas, on the other hand, are land creatures that can walk around freely on the ground.

As a result, they have an advantage against orangutans in ground combat.

Another great hindrance the orangutans will face in a fight with a gorilla is in their teeth.

The gorillas might resort to utilizing their sharp canines as a weapon, and the orangutans will be powerless to defend themselves because their canines are lethal.

Even the Orangutans are probably larger, gorillas are stockier and more solidly built.

Orangutans’ strength is the result of their habitat and lifestyle. These tree-dwelling apes rarely climb off the trees to travel on land.

Swinging from one tree to another is their primary way of travel. They also use vertical climbing to reach fruits.

All these activities require a lot of strength, and that’s why most of an orangutan’s strength is concentrated in its forelimbs.

Moreover, orangutan females are able to support their own weight as well as the weight of their babies.

This strength is a result of certain anatomical adaptations, such as a stronger torso and larger shoulder blade bones, in addition to muscle mass.

Orangutans are the world’s second-strongest apes. They are stronger than chimps, and the gorilla is the only great ape that can compete with them.

Animals That Can Kill a Tiger: See Which Ones Might Surprise You