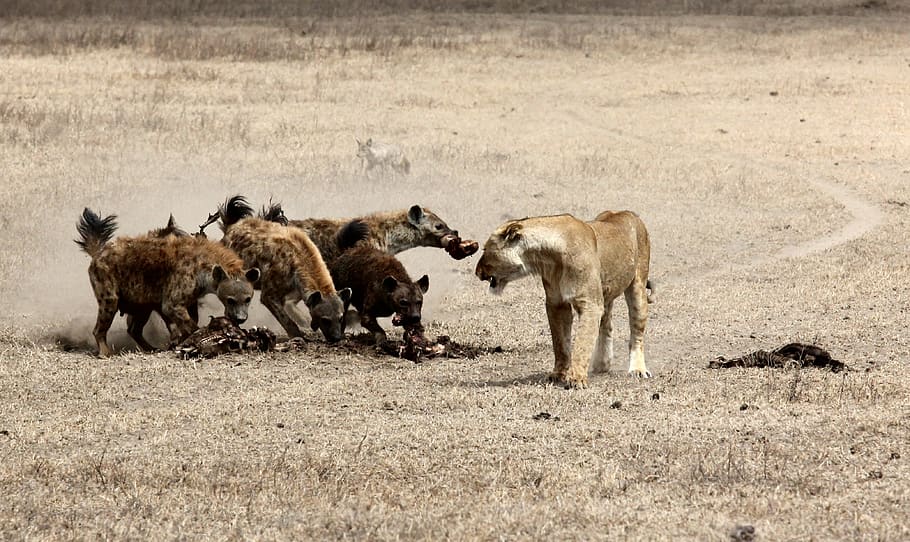 Hyenas are feliform carnivoran mammals of the family Hyaenidae. Hyenas are related to cats. Despite their canid-like appearance, hyenas aren’t even closely related to canids like wolves or African wild dogs, because they belong to the Feliformia suborder, so they’re more related to cats and viverrids. Mongooses can be considered their closest relatives.

The four extant species are the

I’ve seen a single lion take on 21 hyenas and none of them stood on the way after he killed just one.

The sheer weight/size and strength of a male lion is no match for the hyena. An adult male lion weighs 190 kg while the weight of an adult female hyena is 44 – 64 kg.

Tigers on the other hand are much bigger and smarter than lions. They are quite skillful killers and their roar can literally freeze (paralyze isn’t the best word to use) the unsuspecting victim. They are also vengeful, but that’s not the scary part.

The scary part is that they study their enemy thoroughly by identifying its weaknesses and anything that the tiger can use against them, Now that’s the role of the tiger’s intelligence.

The hyenas might scare the tiger when they come in numbers but boy! The tiger won’t just move on…Audience watch As Lion Defeated A Tiger in Arena

He will probably study these ugly laughing bullies and follow them to their den and from there every night one or two hyenas die! Until the Queen decides it’s better to find another territory. There’s nothing as scary as a fearless soldier but nothing scarier than a smart, skillful, fearless, and vengeful soldier now that’s a tiger for you

In the coexistence of both species(Lion and Tiger), Hyenas are the ones who would suffer most.

Cape Lion Facts – Everything You need to know