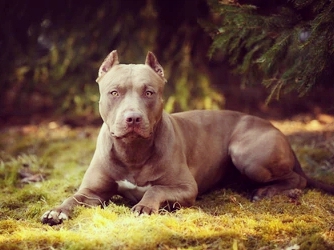 Pitbulls were artificially created from Terrier and bulldog breeds.

The Old English bulldog which was similar in appearance to today’s American bulldogs was used in cruel blood sports known as “bull baiting”. Source

These old English bulldogs which are now extinct were pitted to charge a bull, harassing it for hours until it eventually collapse, from fatigue, exhaustion, and injuries.

These Old English bulldogs in addition to Terrier dogs were then used to breed Pitbulls.

This bull baiting practice was outlawed and termed animal cruelty in the British Parliament in 1835.

Ratting is what happens when dogs were pitted against rats to see which dog would kill the most rats in the least amount of time.  Source

Now you know where the term pit comes from.

The “pit” in Pit Bull comes from ratting because the rats were placed into a pit so that they could not escape.

Today, In some parts of the world, dogs are pitted to fight one another and this is termed animal cruelty.

Dog Fighting should be discouraged and frowned upon.

Dogs are loving, cute animals who would give their life to save the people they love. Killing and eating dog meats should also be discouraged.

Dogs are pets, they should be considered a family member not food for your pleasure. There are so many other meats you can eat from. Why eat dog meat?

According to premium times Nigeria. Do you know that Nigeria is the country with the third-highest dog consumption rate in the world?

The American Bully is the biggest pitbull. Weighing 65 to 85 pounds

The weight of a fully grown German shepherd is 75 to 95 pounds.

There are 4 Types of Pit Bull Dog Breed

Anyways, Pitbull isn’t the most aggressive dogs, they aren’t the strongest dogs either.

The American Pit Bull Terrier has the strongest bite force among Pitbulls and it has a bite force of 235 PSI.

As you can see the bite force of a Pitbull is significantly lower in comparison to the dog breeds stated above.

The media has greatly exaggerated the strength of a Pitbull in an attempt to garner traffic and create fears and panic.

Some Pitbulls are sweet, loving, and gentle.

I have a pitbull called Puma, she’s incapable of harm, she plays with everyone and can never hurt a fly.

Pitbull dogs love human companionship, they love to play, they are good with children, and they love to exercise. etc

Pit bulls were originally bred for bull-baiting and dogfighting, and because of this heritage, they often show a tendency to attack other animals with a remarkable ferocity that contributes to the public stigma against the breed.

So, Is the pitbull the strongest dog?

Kangal is the strongest dog, mostly due to its size and bite force of 743psi, a bite force stronger than a lion

Is Pitbull the most aggressive dog?

There are so many aggressive dogs that attack people and these breeds of dogs have been banned in many countries.

According to the cheatsheet and I quote.

(Some dog breeds get persistently stereotyped as dangerous, aggressive, and threatening. Because of those stereotypes, many cities now ban specific dog breeds across the United States. (That’s despite the fact that scientists say any dog can become aggressive, regardless of breed).

The Most commonly banned dog breeds in the United States

Check out the most commonly banned dog breeds in the United States, according to legislation tracking by Dogsbite.org.

PetHelpful reports that the pit bull is banned more frequently than any other breed — despite the fact that it’s not actually a singular breed.

The term “pit bull” actually applies to several breeds and mixes of breeds, but all of them face stigmas as “aggressive” and “dangerous.” PetHelpful notes, “Every time there is a biting incident, especially if it is serious, a pit bull is blamed. It does not matter if the dog is not a pit bull. If no one knows the dog breed involved, if no one identifies the dog, it is assumed to be a pit bull.”

Anyways, the aggressiveness of dogs is solely due to how it’s trained by its owner.

Some owners train their dogs to be Wild and aggressive and this could lead to fatalities and casualties.

Are all Pitbulls Wild and aggressive?

I have a Pitbull that’s loyal, sweet, and playful, and would never hurt a fly.

Why are humans so afraid of Pitbull dogs?

The media is to be blamed, there’s a lot of exaggeration about the strength and capabilities of a pitbull.

Every dog breed has the tendency to be aggressive and vicious, there are so many dog breeds that are stronger and more powerful than a pitbull in terms of size, strength, and bite force.

I have heard a lot of rumors and exaggerations about Pitbulls so I decided to clarify the Stigma and misconceptions.

Please feel free to make your own findings and comments below.

If you find this article useful and informative, please share and promote it.

Dogs are pets that should be loved and cared for. They should not be used for fighting or killed for food.

Most Popular and Intelligent dogs

Border collie, German Shepherd, and Poodle dog breed consistently hold the top 3 records for smartest and most intelligent dog breed in the world.

The German Shepherd is used as a police dog and serves many purposes, and as a result, some regard them as the most intelligent.

Below are the most popular dogs according to AKC.

These breeds are consistently in the top 10 most popular dogs every year.

A dog’s greatest skill is its power of smell and sight which is far greater and superior to that of humans.

Dogs can perceive danger far away before it gets close, dogs can see better than humans, dogs can communicate as well i.e if you pay attention to their sounds, tail, and body movement.

So what’s do you think about the Pitbull dog breed?

10 Important facts about Pitbull dogs you should know about.