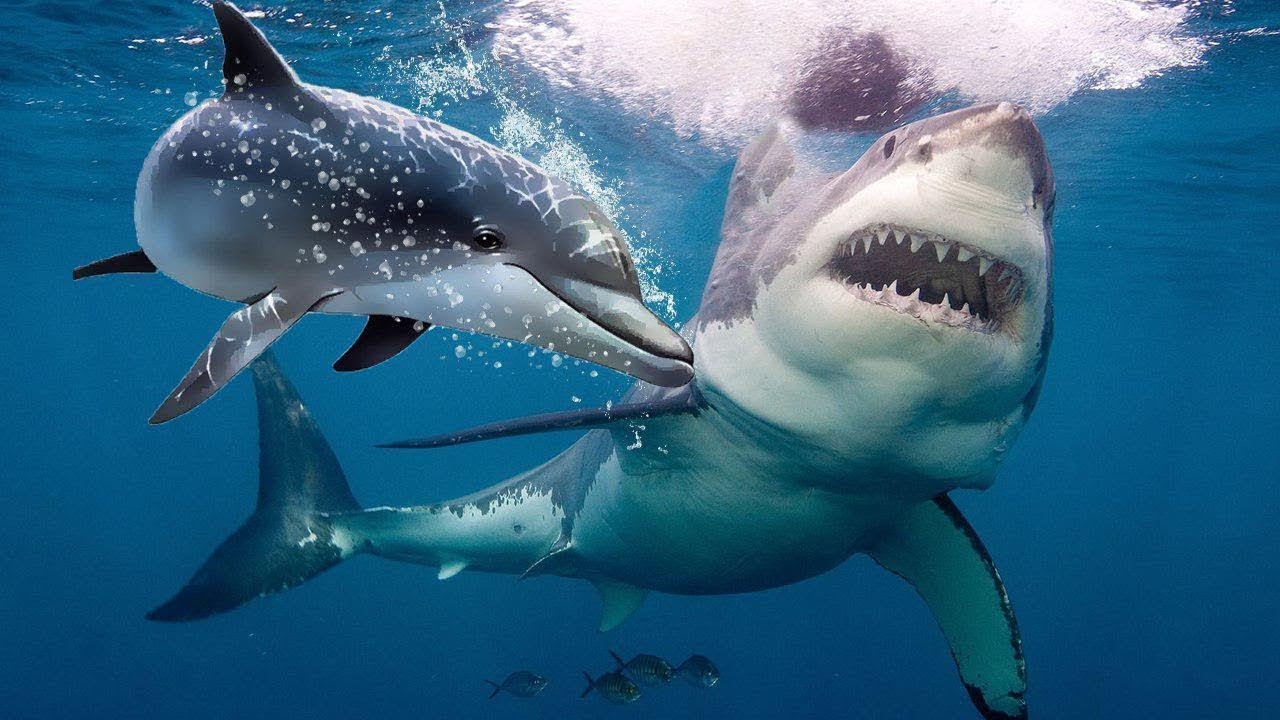 It’s a long Known fact that sharks prefer to avoid dolphins, they swim away quickly when they see them especially grampus dolphins. Simultaneously, in the stomach of some sharks, we found parts of dolphins.

How can it be that such fearless predators are afraid of cute and playful dolphins? Let’s take a look at this.

Dolphins are mammals that live in pods and are quite clever. It’s well known that dolphins are not as harmless as they seem and they know how to protect themselves.

When they see an aggressive shark they immediately attack it with the whole pod not giving the shark any chance of survival. This is why sharks tend to avoid pods with many dolphins.

Advantages of Dolphins over Sharks

Dolphins have some advantages over sharks due to the way their body is built, their upper fin makes them very flexible, the combination of soft skin and flexible skeleton structure allows them to be efficient in a fight. I wonder why sharks fear cute and playful dolphins

The vertical tail of the shark is flat and limits their up and down mobility while dolphins have horizontal tails that allow them to have great mobility and a quick way to change direction in a fast attack.

The heads of dolphins have very thick and very strong skin and act as a biological battery Ram.

Dolphins can be several meters under the shark and then quickly swim upward and slam their snout into the shark’s soft stomach. This will lead to serious internal trauma. Why are Sharks afraid of Dolphins?

When they have to defend themselves they will protect each other from the shark attack with their massive snout that they use to hit the gills and underbelly of the shark.

A well-placed hit can cause enough damage to kill the shark, therefore they can surround a shark and hit her gills first before the actual attack on her stomach. In a way, they just frighten the shark until it swims away itself. Why is Orca called the king of the ocean

Sharks are predators who swim alone, while dolphins travel in groups called pods. Every time a member of the group is in danger, the rest will come to help. Scientists Amazing mysteries about sharks

There are even known cases where dolphins save humans from sharks. There just need to be 2 or 3 dolphins and the shark will prefer to stay away and avoid clashing with them.

Sharks like to attack targets that are smaller than them for example small dolphin babies. When they decide to attack a baby dolphin they usually can escape an attack by a pod full of angry dolphins.

The biggest advantage of the dolphins however is their intelligence. By using echolocation they move fast in the water in other to avoid or attack sharks. A shark’s biggest chance of killing a dolphin is when the shark is hidden away from their sight since they are silent predators.

But if the first try by the shark is unsuccessful, the dolphin can easily swim away or regroup to fight with the rest of his pod. Additionally, Dolphins are incredibly fast, they can swim faster than the majority of sharks making them an elusive food that is not worth the effort.

According to the data provided by organizations supporting whales and dolphins (MWDW- Manx Whale and Dolphin Watch), one-third of the dolphins living in the waters of Sarasota Florida have scars from incidence with sharks.

That’s why in some parts of the world sharks are considered to be the biggest threat to dolphins. However, there are one more dolphin species that scares the white shark is the killer whale.

The biggest representative of dolphins and they hunt for white sharks when they don’t have enough food. They use their massive and strong tail to flip the shark over and make them immobile. Why are whales afraid of orcas?

This is why white sharks prefer to flee from killer whales immediately as they are especially interested in eating their liver. With extreme precision, they take out the shark liver and throw away the rest of the body. No wonder sharks are afraid of them. What do you think?

Would sharks be afraid of dolphins if they didn’t swim in pods?

Jaguar vs Leopard: 8 key Differences Between These Big Cats