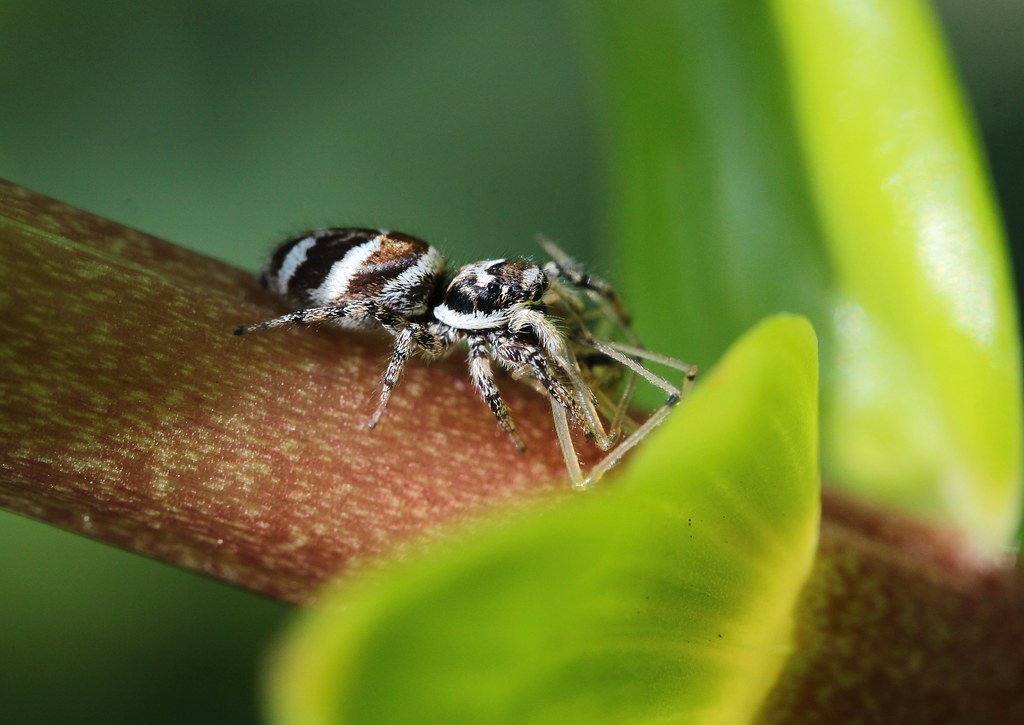 Animals are given names based on their color, appearance, markings, and other characteristics. The Zebra Spider gets its name from the fact that it is black with white hair and white color stripes, just like a zebra. They are sometimes known as Jumping Spider of the Northern Hemisphere.

What is the scientific name for the Zebra spider?

Because of its agility, the name Salticus was taken from a Latin term that meant “dancing,” and Scenus is a Greek word that means “theatrical” or “decorative area.”

How many eyes do they have?

It is crucial to note, however, that they are members of the Salticidae family, which means they have an enlarged anterior median eye, as well as large anterior and posterior-lateral eyes in comparison to the small posterior median eyes. These numbers indicate that the zebra spider has eight eyes. Fearless Nature of Zebra and Lion in the Wild

One eye, in particular, the exceptionally big anterior median eyes, is used for superb binocular vision.

In locations like North America, Europe, the United Kingdom, and the Arctic, they are frequently spotted in close proximity to humans just like Cockroaches and wall geckos. During the day, zebra spiders can be seen on window sills just behind the curtains and on walls, plants, and fences outside.

How does zebra spider catch its prey?

The zebra spider catches its prey in a variety of ways.

The zebra spider uses its enormous front eyes to find and pursue its prey, crawling slowly approaching them before pouncing on them.

This hunting strategy has been compared to that of a cat. Their keen vision allows them to calculate the exact distance needed to leap and seize the prey.

They leap to their prey with the help of a sticky silk thread, and if they miss, they climb up the silk thread and try their luck again; ants are unpalatable to them.

When the male and female are close enough to touch, the male will wave his front legs and moves his abdomen up and down, in a dance that the female will finds appealing—only then will she agree to mate.

Afterward, the female will stay with the egg sacs after mating and guard them until they hatch. After their second molting, the fingerlings are most likely to abandon their moms and fend for themselves.

Do They Pose a Threat? These spiders aren’t aggressive biters and won’t bite unless they’re handled or threatened in some way.

They do generate venom, which is used to immobilize their food, but because the spiders are so little, the venom is only likely to cause minor injury to humans.

Humans are not harmed by zebra spiders. They are frequently misunderstood as hostile due to their leaping activity (they jump more than they walk).

This is a natural behavior for them, and they will not bite unless they are frightened or provoked. Most people will only experience moderate irritation if they are bitten.

Jumping spiders, on the other hand, are my favorite spiders. They have a welcoming and inquisitive temperament.

Have you ever spotted a spider species hopping around your home? Leave your comments below!

How to start up a successful poultry farm in Nigeria